Why, why, why: At Quora, experts answer 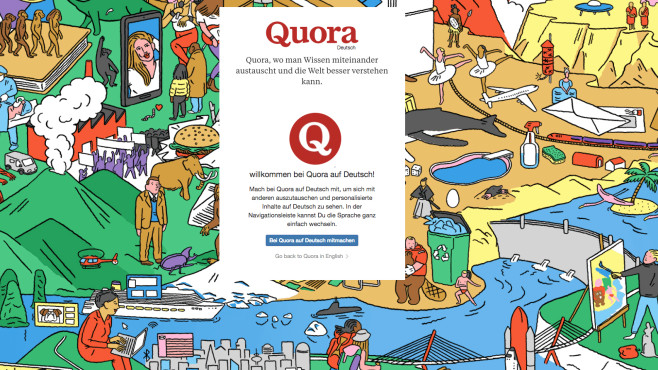 Why why why? In the Quora question community, experts answer all kinds of questions.

Whether on a good question, on Reddit or online forums: people seem to like to ask questions about anything on the Internet. From personal and medical to pure curiosity. The problem: It is better to ask embarrassing questions anonymously - but then the identity of the respondent remains secret. It is difficult to judge whether someone is just figuring out something or can actually answer a question competently. This is exactly what Quora wants to offer: Here anyone can ask their questions (also anonymously) - and other users answer under their real name. Most of the time, the user profiles even contain job titles and areas of knowledge.

At Quora, anyone who asks what it's really like to work on Facebook will most likely get an answer from an employee on the social network. Maybe even Quora founder Adam D'Angelo, who was part of Facebook's founding team, would answer that question. D'Angelo founded Quora in 2009, and the site went online in English in June 2010. Quora has been expanding since October 2016: At that time, the site was launched in Spanish, and French and Italian were soon added. Quora has also been available in German since July 2017. The question network will soon also be available in Japanese.

If you want to read along, you don't have to register or log in - you can find questions and answers as well as specific people on the Internet. However, only registered users are allowed to contribute to Quora: If you want to ask or answer a question, you have to register - with your real name. “Sometimes we even have users show us ID cards,” says Kerstin Ewelt, who heads the German-speaking Quora community. However, this seldom happens.

»This is how much the most popular social media stars earn

Similar to Reddit, the user also chooses with Quora which topics interest them. He then receives an email every day with questions and answers that are of interest to him in his mailbox. Something else is reminiscent of Reddit: As many Quora users as they feel called can reply to an answer. The community decides which answer ends up at the top of the question. Every Quora user can vote for (or against) an answer. However, not all votes are equally weighted: "If a doctor gives an answer to a medical question an upvote, our algorithm automatically gives it more weight," says Ewelt.

In the English version, celebrities have often spoken out, including former US President Barack Obama. In Germany, no top politician has yet participated in Quora. However, according to Kerstin Ewelt, politics is one of the most popular Quora topics in Germany. Also in psychology, health, IT, job and career as well as philosophy, many users should get involved in the question community. Quora currently has 200 million users worldwide. Quora is currently not commenting on how large and active the community is in German-speaking countries.

Funded by advertisers and investors

Quora is mainly financed by investor money. In the US, there have also been ads that Quora receives money for for about two years. It is currently not known when they will also find their way onto the German market. A total of 200 people work for Quora, all of them are based in Silicon Valley. However, the algorithm behind Quora also does a lot of work. If users ask or answer a question, he checks the basics: Does the user's name sound real or does it say “Superman 123”? Does the answer have a lot of typos and few commas, or did someone really make an effort to write it? "Those who give good answers can build a reputation for being an expert in their field," says Ewelt. This should, for example, increase the chances on the job market.