Who sells the best roast chicken 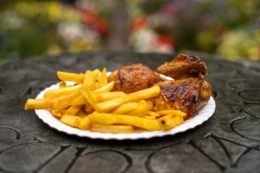 In 2018, the per capita consumption of poultry averaged 13.2 kg - and the trend is rising. Or not? Because will the VAT on meat soon be increased? The Tierschutzbund rejects the proposal. Certain consumer groups - presumably the poorer - would be punished too much. Another form of "meat delivery" would be far more sensible in the opinion of the Animal Welfare Association. We think so too, so we're looking for the best chickens. The first surprise: the selection isn't that big in Mainz - but there are differences. 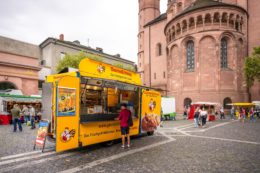 Chicken Mobile
Two larger mobile chicken vendors are out and about in Mainz and the surrounding area: in yellow the Gaumenschmaus company on Tuesdays at the weekly market or Netto in Mombach and on Wednesdays at the weekly market in Gonsenheim. In red trucks it's Nuri‘s chicken grill: Saturdays at Netto in Neustadt (Sömmeringstrasse) and Mondays and Thursdays at Netto in Weisenau (Hechtsheimer Strasse). Gaumenschmaus has been running the Mobile for over 40 years and has over 200 chicken stalls all over Germany. The range also includes turkey legs, french fries and small salads in plastic packaging. Nuri‘s come from Turkey, they work with several mobiles in the Mainz / Wiesbaden area. The range is slightly smaller than at Gaumenschmaus and the prices are around 20 cents cheaper. Both operators purchase the meat from the Wiesenhof company, which belongs to the PHW Group (30th place among the largest suppliers to the German food retail sector). PHW slaughters around 5 million chickens per week. It is also a leading supplier of animal feed and vaccines for animals. The company has come under repeated criticism for allegedly abusing animals in subcontracting. He is also accused of exploiting Eastern European workers in favor of profit optimization and of overexploiting (ground) water supplies. The chicken eaten with plastic cutlery in the kiosk ambience is also almost tasteless. The whole thing is not very crispy, the fat content is medium; you don't really want to know what you just ate. The fries are also below average. Half a chicken is 4.20 euros, the thigh is 2.30 euros. Nuri's chickens scored better in our test and were crispier. The fries are ok too. Half a chicken is 4 euros, the whole at 7.50 euros. French fries 2 euros. With both providers of Wiesenhof chickens, it should be clear to everyone that they are real mass-farmed goods.

Zarkos grill station (Hechtsheim industrial park)
Another snack truck is in Hechtsheim (Rheinhessenstrasse 7) behind McDonalds: Zarkos grill station. The slightly rotten cart carries grilled chicken and all kinds of carnal cravings: curries and sausages, cevapcici, meatballs and schnitzel. There are also small salads in plastic packaging, fries and drinks. The chickens are from the old friend Wiesenhof / PHW and were pretty dry around 3 p.m., hardly crispy, but quite well seasoned. Half a chicken sells for an unbeatable EUR 3.70 and the whole for EUR 7.40. Well got it - or not.

KFC (Kastel and Bretzenheim)
The classic half chicken is not available here, but the legendary "chicken pieces" in the cardboard bucket. The US franchise fast food company is one of the world's largest restaurant chains with more than 20,000 restaurants, but is rather sparsely attended at lunchtime. The sterile, slightly worn out first impression is made up for by the service, which is not at all system gastronomic, and is helpful in putting together a savings offer. In addition to the coleslaw, there is boiling hot mashed potatoes with gravy, a kind of gravy. That goes very well with the thickly breaded chicken pieces, which taste spicy and are not too dry, but quite greasy. When preparing the tender meat breaded on site, the chain swears by a closely guarded “secret recipe” made from eleven herbs and spices - legends are simply part of it. The Hot & Spicy variant of the chicken parts should also be mentioned. There are also burgers and wraps, other side dishes and drinks in the refill. Organizations such as PETA have repeatedly accused suppliers and KFC of violating animal welfare and environmental protection regulations in the past. KFC itself signed the Better Chicken Commitment (BCC) - a voluntary commitment to improve the living conditions of animals ... Chicken One (Gonsenheim) The Gusan family's KFC-like shop is located at Elbestrasse 90. Eight years ago she founded her 100% halal chicken idea here and does not see herself as a fast food restaurant. Nevertheless, the shop looks like this and the halal designation does not protect against the fact that the delivery comes from the Drobimex company in Poland. Here, too, the well-known PHW Group (including Wiesenhof) is active again, which also produces for the Polish market almost 20 years ago by taking over a majority stake in Drobimex-Heintz. Even when Chicken One is freshly prepared (chicken pieces, fillets, burgers and wraps), you can taste the chicken dressing and then feel slightly cured with animal vaccines. The breading tastes good and accessories such as coleslaw and salad dressing are also delicious. In the restaurant you use real plates and cutlery - but that was off during our visit and there was plastic cutlery in the plastic packaging. A chicken piece costs 2 euros, the more you order, the higher the discount. French fries from 2.20 euros, burgers from 4.50 euros.

Chicken Kokio (Upper Town, Schillstrasse 87)
You feel transported to Asia with Asia TV and some Koreans hanging around here. There is no toilet because more is actually delivered outside the home. Nevertheless, you can dine like in Korea - the menus are special: Kokio Chicken Balls in three versions with very tasty sauces, fried chicken with vegetables, the Kokio Wing or the Chicken Pom Ball with small potato cubes. Everything prepared very tasty. Here, too, the origin of the meat remains doubtful (according to Koch, a Frankfurt wholesaler). Still a smart concept, including the partly Asian drinks, the friendly cook, a mini pool table and free WiFi. Insider tip!

Palmengrill (Lotharstrasse 24)
Self-service is the order of the day in the palm grill near the Römerpassage. The friendly and fast staff loads our half chicken with fries (5.80 euros) including a plate onto a black tray. Coleslaw 1 euro extra. As an alternative to French fries, there is rice. In terms of taste, the chicken can keep up to some extent, although it is not particularly crispy, not even dry, but rather juicy and greasy. There are deductions for the sticky, thick ketchup. If you don't like the snack atmosphere, you can take a seat outside in the pedestrian zone. The chicken is also available as a small portion in the form of a leg with french fries for 4.80 euros. Otherwise, the shop also sells burgers and beef (curry) sausages. Not top quality, but very cheap - if you have to go fast and you don't want to know more. Hahnenhof (Wallaustraße 18 / Frauenlobplatz) We had already suspected it, the Hahnenhof is the premium contact point for fried chicken lovers. The poultry used there is not mass-produced, but comes fresh from selected poultry farms, the meat from the Odenwald. The soups and sauces are gluten-free, additives and flavor enhancers don't stand a chance with the Austrian chef. We order half a herb chicken from the grill (13.50 euros) and a roasted Viennese fried chicken with a potato cucumber salad (17.50 euros). The roast chicken Best of Mainz The big herb chicken test, in which the cook has massaged the herbs into the skin beforehand, is crispy and tasty, the fries and sauces are exactly how they should be. The service is personable and professional. The top grade goes to the fried chicken, which should also please meat eaters with bone phobia. The breading is crispy and neither too thin nor too thick. The potato and cucumber salad served with it is refreshingly delicious and convincing in its simplicity. If you want to treat yourself to something, stay until dessert (Kaiserschmarrn!). 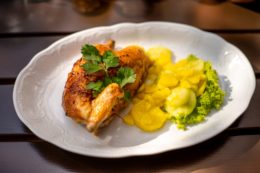 Hahnenhof (Wallaustraße 18 / Women's lobby)
We already suspected it, the Hahnenhof is the premium contact point for fried chicken lovers. The poultry used there is not mass-produced, but comes fresh from selected poultry farms, the meat from the Odenwald. The soups and sauces are gluten-free, additives and flavor enhancers don't stand a chance with the Austrian chef. We order half a herb chicken from the grill (13.50 euros) and a roasted Viennese fried chicken with a potato cucumber salad (17.50 euros). The roast chicken Best of Mainz The big test herbal chicken, in which the cook has massaged the herbs into the skin beforehand, is crispy and tasty, the fries and sauces are exactly how they should be. The service is personable and professional. The top grade goes to the fried chicken, which should also please meat eaters with bone phobia. The breading is crispy and neither too thin nor too thick. The potato cucumber salad served with it is refreshingly delicious and convincing in its simplicity. If you want to treat yourself to something, stay until dessert (Kaiserschmarrn!).

Ayam Saman (Schottstraße 7 / Hbf)
As the successor to a 1980s Italian at the main train station, the Syrian snack bar has existed for almost two years. The lively flair attracts local Syrians and Mainz residents alike. It is not served in the style of dreamy hipsters, but almost over-motivated. The classic half chicken (6 euros) is tasty and somewhat crispy, the fries come with a garlic sauce that also plays with breakfast the next day. The specialty are the chicken pieces from the charcoal grill. They're less greasy, but with a real grill flavor. Worth a visit!

Conclusion
We feel sick after so much chicken. You feel kind of stuffed full of vaccines, flavor enhancers have made for an unpleasant addictive factor. Most of the stuff is also heavy in the stomach. In addition, most of the animals probably come from rather dubious sources. Now you want to become a vegetarian. For everyone who can't do it: Avoid strange stands with fast food mass-produced goods and unclear sources and instead go to a better restaurant every now and then (e.g. Hahnenhof) or buy and prepare the organic chicken from a trusted dealer.

P.S .: The new Golden Grill on the Römerpassage is not there yet. It had only opened shortly before our printing deadline.