What role did Vietnam play during World War II

1968: US and South Vietnamese soldiers defend a position.

The Vietnam War was a war in Vietnam. It lasted from 1955 to 1975, i.e. for 20 years. In this conflict, South Vietnam fought against the rebellious Viet Cong and the communist north of Vietnam. Later the USA interfered in the war and fought on the southern side. The north was supported by China and the Soviet Union, but only with weapons and military advisers. The Vietnam War is therefore also referred to as a “proxy war”: it actually belongs to the Cold War between the Soviet Union and the USA.

The war took place not only in Vietnam, but also in the neighboring countries of Laos and Cambodia. These three countries together belong to a region called Indochina. The war ended after the US stopped supporting southern Vietnam as much. In 1975 the north was able to conquer the south. Vietnam was reunified and the Communist Party has ruled the whole country ever since. The war claimed between two and five million lives. Most of them weren't soldiers, but civilians, so normal people. 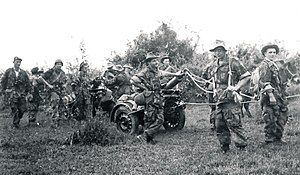 From 1887 Vietnam belonged to the colony of French Indochina, along with Laos and Cambodia. That changed after 1940: France initially lost to National Socialist Germany in World War II. The colonial rulers in Indochina had to work with Japan. The Vietnamese saw that France was weakened.

In the north in particular, a movement emerged that demanded that Vietnam become an independent communist state. On the other hand, the Japanese wanted to use the weakness of the French to conquer Vietnam. In 1945 Japanese soldiers occupy Vietnam for a few months. Later, after Japan was defeated in World War II, the north became an independent state. The south initially remained loyal to France.

In the winter of 1946 the First Indochina War broke out. France and South Vietnam fought against the north. The war ended in 1954 with France withdrawing from Vietnam. What remained were the two independent states of North Vietnam and South Vietnam. From then on, the Communist Party of Viet-Minh ruled in the north, and a dictatorship in the south that believed it was the real Vietnam.

How did the Vietnam War come about?

In the south, the Catholic Ngo Dinh Diem became the first president. With the money he received from the United States, he built a strong army. He became a tyrant who primarily made sure that the Catholics in the country were doing well. He treated other populations like the Buddhists badly. So he had an old hill tribe resettled so that Catholics could move into their homes.

Diem's ​​policies soon led to uprisings that turned into civil war in 1955. The insurgents wanted to overthrow Diem and join the communist north. They called themselves the "National Front for the Liberation of South Vietnam". They were more often called the "Viet Cong". They were supported by North Vietnam and its allies. As a result, Diem's ​​soldiers soon had to fight in different places.

What role did the USA play?

Even before 1955, the US was helping the South with money, weapons and military advisers. As it became more and more likely that the south would lose the war, a decision was made in 1964 to send American military to Vietnam as well. The US feared that communism could spread to other countries in Asia if South Vietnam lost.

American planes bombed the Viet Cong villages. Napalm bombs were used because it was difficult to see the enemies because of the dense jungle. These cause major forest fires. The aircraft also sprayed toxic chemicals such as "Agent Orange" to make the leaves in the jungle wither and fall off. As a result, many civilians also died of poisoning.

Although the Americans were better equipped, they had problems winning the war. Again and again the Vietnamese attacked surprisingly from an ambush, killed a few US soldiers and then disappeared again into the jungle. This type of warfare is called guerrilla tactic.

When the Americans realized that fighting no longer made sense, they made peace with North Vietnam in 1973. They did it because a lot of people in the US kept protesting against the war. The south was now on its own again. Two years later, the North Vietnamese soldiers marched into the South Vietnamese capital Saigon and took power.

What were the consequences of the war?

A girl who had to flee Vietnam after the war.

Most of the millions of victims the war claimed were Vietnamese. Very often they weren't soldiers, but people who weren't actually involved in the fighting. To this day, the Vietnamese are still dying from the long-term effects of the chemical attacks by the Americans. In addition, about 50,000 American soldiers died.

After the war, all of Vietnam as well as the neighboring countries Laos and Cambodia became communist. Some Vietnamese fled from the communists. They mostly went to Malaysia in simple boats and were later accepted as refugees by France and the USA. Some also came to Germany. They are called "boat people".

For the USA, the Vietnam War was a “national trauma”: A small Asian people managed to defeat the superpower. Many American soldiers had experienced the cruelty of the war and returned from Vietnam with mental health problems. They struggled to get used to normal life again. Ultimately, the expensive war also damaged the American economy, and many people around the world began to think badly of the United States.

There are also other search results for "Vietnam War" from Blind Cow and Ask Finn.

The Klexikon is like a Wikipedia for children and schoolchildren. The most important things explained simply, with definition, many pictures and maps in over 3000 articles. Basic knowledge suitable for children, everything easy to understand and good for presentations in school.
<?