For "Humble" Kendrick Lamar had already received the award for the best hip-hop video of the year. The 30-year-old started the show in Los Angeles with an elaborate performance in which his dancers climbed up and down a burning wire mesh. In the video, the rapper ironically addresses fame and fortune and is portrayed in numerous roles - from the Pope to Jesus at the "last supper". In the fight for the title of best artist, however, Lamar had to admit defeat to the British Ed Sheeran.

For the first time "Best Fight Against the System"

The best new artist was the R&B singer Khalid. Pink received the Michael Jackson Vanguard Award for her 15-year career. For the first time, a prize was also awarded in the "Best Fight Against the System" category. MTV awarded it equally to all six nominees, including K'Naan and John Legend, who used their videos to draw attention to the situation of immigrants in the USA. Susan Bro, mother of human rights activist Heather Heyer, who was killed on August 12 in Charlottesville, also received this award in a moving performance. 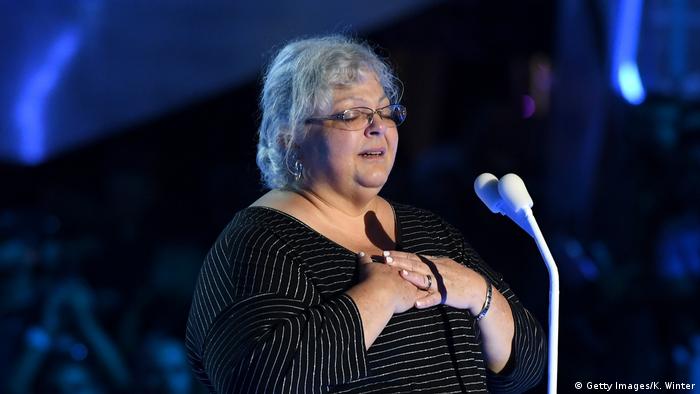 Made for a highly emotional appearance: Susan Bro, the mother of Heather Heyer, who was killed in Charlottesville

To thunderous applause from the audience, Bro announced the establishment of a foundation to preserve her daughter's legacy: "Today I am announcing the start of the Heather Heyer Foundation." The foundation will award scholarships that should enable more people to join Heather's fight against hatred. "I was deeply moved that people from all over the world found inspiration in their courage," said Bro. "I miss her, but I know she is here today."

Many stars used the three-hour show for political statements and personal addresses. Presenter Katy Perry criticized US President Donald Trump with several gags right from the start and asked the audience how people "deal with" him. The attitude of many artists was clear. Michael Jackson's daughter, Paris Jackson, said there was zero tolerance for hatred and racism.