Bulgaria is a country in Europe. It is located in the south-east of the continent and borders Romania, Serbia, North Macedonia, Greece and Turkey. The capital, Sofia is also the largest city in the country. Bulgaria is almost three times the size of Switzerland and has slightly fewer inhabitants. Bulgaria may have got its name from Turkish tribes from the early Middle Ages. Their language is a Slavic language and is therefore related to Serbian, for example.

Bulgaria is located south of the Danube River. The mountains of the Balkans run through the country. There are also smaller mountains and the Upper Thracian Plain, which is very fertile. Agriculture is practiced there, and most of the residents live there. Summers in Bulgaria are warm to hot, especially on the Black Sea.

Most of the inhabitants are called Bulgarians. Only a few are Turks, around five out of a hundred are Roma. Most of the residents profess to the Orthodox Church. The constitution guarantees freedom of religion, but there are very few people of any other faith.

What happened earlier in Bulgaria? 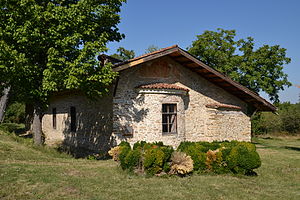 An orthodox church in Arbanasi in the north of the country. It is dedicated to Saint Demetrius.

The first archeological finds date from the Neolithic Age. The most famous of these is the gold treasure from Varna. Later the Greeks occupied the area, then the Romans. From the year 679 the area belonged to the "First Bulgarian Empire". From 1393 the Ottomans conquered the area.

From around 1800 the Bulgarians tried to determine themselves. However, they did not achieve this goal until 1878. Thirty years later Bulgaria gained independence. However, after the Second World War, the country was occupied by the Soviet Union. It had a communist government for about forty years. When communism collapsed around 1990, Bulgaria gained independence. Bulgaria has been a member of the European Union since 2007.

What do the people in the country live on?

The country is one of the poorer in Europe. Around every fourth Bulgarian worker is employed in agriculture. Bulgaria used to sell more tobacco abroad than any other country.

Tourism is becoming more and more important. People come to bathe on the Black Sea, to hunt in the mountains, for winter sports or because of the country's culture. UNESCO has designated seven places or buildings as World Heritage Sites, for example the Rila Monastery, the rock-hewn churches of Ivanovo, the old town of Nessebar and others. Two national parks are considered natural heritage.

Bulgaria's currency is the lev. One lev is 100 stotinkes. The Bulgarian government has stipulated that the exchange rate to the euro should always remain the same.