Scandals led to by-elections for the mayors of Seoul and Busan. In both cities, the opposition is now the mayor. These elections serve as a barometer of sentiment for the 2022 presidential election. 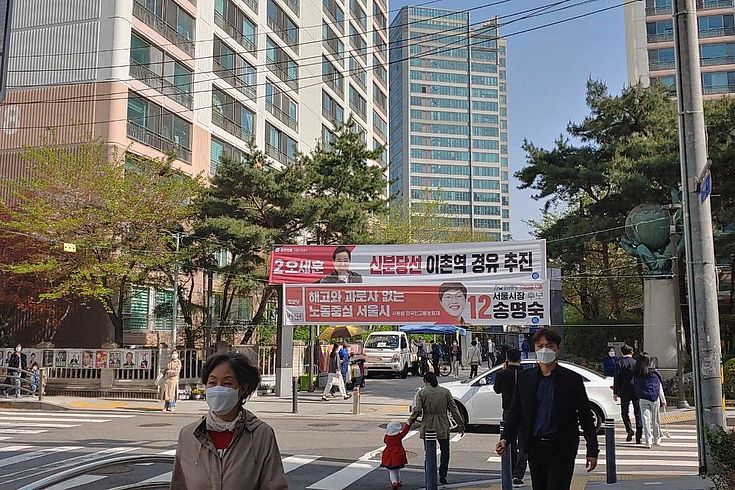 In Seoul, the capital of South Korea, voters are on their way to the polling station. Oh Se-Hun was elected mayor.

In the mayor by-elections in Seoul and Busan, the opposition conservative party, People's Power Party (PPP), won a major victory (1). Oh Se-hun, who had been mayor from 2006 to 2011, was re-elected in Seoul.

Park Hyung-joon, a close associate of former President Lee Myung-Bak, will be Mayor of Busan. Both are replacing mayors of the left-wing Democratic Party who left office because of sex scandals.

The election is also considered a vote of no confidence in President Moon Jae-In and is classified as an important preliminary decision for the presidential election in April 2022. Although President Moon cannot be re-elected anyway (in South Korea only a one-time election as President is possible), Moon is now politically a “lame duck”. The promising candidate of the establishment of the Democratic Party (DP), Lee Nak-Yeon, favored by Moon, is equally badly hit with the election. On the conservative side, however, a presidential candidate has yet to be found. The former attorney general Yoon Seok-Youl is currently the most promising candidate. Although he was brought into office by Moon Jae-In, he fell out over the reform of the prosecutor's office, was dismissed and became very popular. It is considered likely that the PPP wants to recruit him as a candidate. But it could also be that the first brilliant election victory since four defeats leads politicians from the ranks of the PPP to run themselves.

As a result of these mayoral elections, the entire leadership of the Democratic Party (DP) resigned, a process not uncommon in Korea.

Oh Se-Hun, candidate for the opposition People’s Power Party (PPP), won the by-elections in Seoul with 57.50 percent compared to 39.18 percent for the ruling Democratic Party's candidate, Park Young-Sun. He was well ahead of the DP candidate in all districts, but won over 60 percent of the votes, especially in the rich south (Kangnam). In the parliamentary elections a year ago, the DP was still ahead with over ten percent. Seoul is so important because it is the largest city in Korea with over 10 million inhabitants and because the voters here are not as politically determined as in the southern half of South Korea (where the eastern part traditionally votes conservatively, the western part left). Oh Se-Hun was mayor from 2006 to 2011 (succeeding Lee Myung-Bak, who became president), but then linked his political fate with a referendum against free school meals, which he lost. Park Won-Soon was elected mayor with the support of the DP. Now Oh triumphantly returns to office.

In Busan, the second largest city with around 3.5 million inhabitants, the conservative candidate Park Hyung-Joon was elected with 62.67 percent, compared with 34.42 percent for the left-wing DP candidate Kim Yeong-Joon. Busan is traditionally considered to be rather conservative, but President Moon comes from here and there have been successful leftist candidates here over the past ten years. Park replaces former DP mayor Oh Keo-Don. 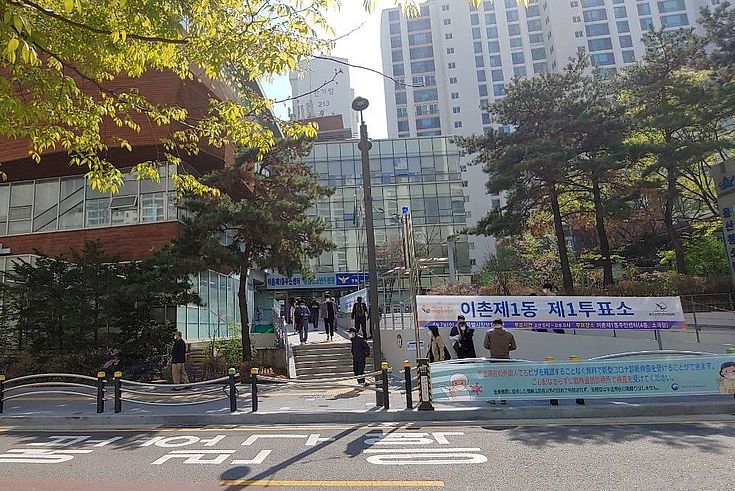 A polling station in the Yongsan-Gu district of central Seoul. Because of the corona pandemic, the number of postal voters reached a peak.

Background of the elections

The background to both elections was a sex scandal involving the ruling mayors of the left-wing Democratic Party. Park Won-Soon, Mayor of Seoul, had earned a great reputation as a representative of NGOs. He was elected three times, once in the 2011 by-election, then in 2014 and 2018. On every occasion, he emphasized how important the advancement of women was to him. However, it then became known that Park had been harassing an employee of the town hall for years. He and his surroundings tried to portray this as unbelievable. When the publication of their allegations could not be stopped, Mayor Park, who had also been considered presidential, took his own life.

Also in Busan, Mayor Oh Keo-Don was forced to resign from the DP for harassing city officials. Both cases are spicy for several reasons: On the one hand, it becomes clear how big the gap is between public statements about the importance of promoting women and the real, personal behavior of party representatives. On the other hand, the Democratic Party has expressly anchored in its statute that no candidates would be put up in the affected districts as a consequence of resignations due to corruption or sex scandals. Here, too, the reality was different: after the mayor posts of the two most important cities in Korea, Seoul and Busan, had been lost, this waiver was quickly changed, which had previously been introduced as proof of one's own cleanliness against the allegedly more corrupt conservative opposition. This fits in with a series of similar events, e.g. with the former Justice Minister Cho Kuk, who had to resign from office after a week because, although he always spoke out for cleanliness in politics, his family had caused a number of scandals.
But this background of the elections alone was not decisive for the crushing defeat of the ruling party. At the beginning of the election campaign, Park Young-Sun, who ran for the DP for the mayor's office in Seoul, did well in the polls as a former minister for small and medium-sized enterprises. However, general dissatisfaction with the government, particularly the government's real estate policy, eventually masked all local issues.

First of all, of course, the reason for the by-elections themselves was a campaign issue. The conservative opposition declared that the ruling party forfeited its right to re-election due to the scandals that led to the death or resignation of the two mayors.

National issues, especially real estate policy, became much more important in the course of the election campaign. The Moon government has tried with dirigistic measures to slow down the increase in property prices in Korea - with Seoul clearly leading, but also the metropolis of Busan. However, these measures ultimately only led to fewer new investments in buildings and thus even further price increases. In addition, real estate scandals are shaking the DP's image: In order to cope with the unrestrained influx of people into the capital Seoul, so-called "New Towns", satellite cities with 150,000 to 500,000 inhabitants, have been newly planned and designated in the area around Seoul for years . Land and Housing Corp., a state-owned company, is responsible for this. Shortly before the elections, it became known that employees had massively enriched themselves in the last two New Town decisions by buying land themselves or people close to them. And another incident related to the new law against rent increases angered the citizens: Shortly before its enactment and knowing the planned new regulations, two close employees of President Moon had pushed through higher rent increases for their own properties.

Corruption scandals of this kind are not new in South Korea, but there has been so much trouble because the DP has always insisted that it is the “clean” party that will fight the “old evils”. In fact, nothing has changed under the leadership of the DP. This apparent double standard was one of the major campaign issues.

In addition, as always in local elections, there were a number of less nationally recognized but locally important issues, such as transport policy in Seoul.

The elections have an important character that goes beyond their local significance. They point the way for the presidential election - the advantage that seemed overwhelming for the ruling party just a few months ago has now been completely wiped out.

For the two new mayors, there is now a shortened election period of just under one and a half years until the new regular local elections. However, it is difficult to imagine (but not impossible) that the mood will change completely by then. Oh Se-Hun, the new PPP mayor of Seoul, in particular, has to struggle with resistance, even downright hatred, of the DP, but also with its preponderance in the council: There it has 101 of 109 council members, as well as 24 of 25 local mayors in Seoul. Already on the first day of Oh's term in office, they said they would block his policies.

If one compares the huge preponderance of the DP with the current occupation with the preponderance of the conservative party in the current mayoral elections for an election forecast, one has to note that South Korea awards parliamentary seats on the basis of majority voting. That is, a relatively small swing between the large parties can be enough to bring about large movements in the distribution of seats. Korea is neither a structurally conservative nor a markedly left-wing country; the electorate is roughly balanced. That is why the current result should not be overestimated, especially with regard to the presidential elections.

Nothing has been decided yet with regard to the candidates for the presidency of the DP: In addition to the former attorney general Yoon, the left-wing, populist candidate Lee Jae-Myung, governor of Gyeonggi-Do (the province around Seoul, with good 10 million inhabitants), particularly popular. However, he lacks the support of his own party establishment, which is more center-left oriented.

So it will be exciting in many ways before the presidential elections.