Why did Hitler attack Poland? 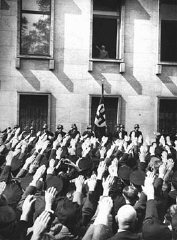 One of the first important foreign policy measures Adolf Hitler took after he took office was the signing of the non-aggression pact with Poland in January 1934. This step met with displeasure among many Germans. Although they supported Hitler, they clashed with the fact that Poland had been awarded the former German provinces of West Prussia, Posen and Upper Silesia under the Versailles Treaty. However, Hitler sought the non-aggression pact in order to exclude France and Poland from allying themselves militarily against Germany even before Germany could rearm.

In the mid and late 1930s, France, and Great Britain in particular, pursued a foreign policy of appeasement. This so-called appeasement policy was closely linked to the British Prime Minister Neville Chamberlain. The aim of this policy was to maintain peace in Europe by giving the Nazi regime limited concessions with regard to its demands. British public opinion favored a partial revision of the territorial and military provisions of the Versailles Treaty. In addition, in 1938 neither Great Britain nor France saw themselves militarily in a position to wage war against Nazi Germany.

Great Britain and France accepted the rearmament of Germany (1935–1937), the remilitarization of the Rhineland (1936) and the annexation of Austria (March 1938). After the British and French negotiators had awarded the Czech border regions, the so-called Sudetenland, to Germany under the Munich Agreement in September 1938, they urged France's allies, Czechoslovakia, to give in to Germany's demands for these regions to be integrated. Notwithstanding the British-French guarantees for the integrity of the rest of Czechoslovakia, the Germans smashed the Czechoslovak state in March 1939 in violation of the Munich Agreement. Britain and France responded by guaranteeing the integrity of Poland, the neighboring state of Czechoslovakia. Hitler then negotiated a non-aggression pact with the Soviet Union. The German-Soviet pact, signed in August 1939, contained a secret agreement that Poland should be divided between the two powers. This enabled Germany to attack Poland without fear of Soviet intervention.

Attack on Poland and partition

On September 1, 1939, Germany invaded Poland. In order to justify the military aggression, the Nazi propagandists claimed that Poland, with its allies Great Britain and France, had planned to encircle and divide Germany, and that Germans residing in Poland (so-called ethnic Germans) were being persecuted in Poland. Together with the German military, the SS staged a fake Polish soldier on a German radio station. Hitler then invoked this action to start a "retaliatory campaign" against Poland.

Poland mobilized late and political considerations forced the army to make strategic compromises. In military terms, Poland was greatly inferior to the Wehrmacht. Despite stubborn fighting and heavy losses on the German side, the Polish army was defeated within a few weeks. From East Prussia and Germany in the north and from Silesia and Slovakia in the south, German units with more than 2,000 tanks and over 1,000 aircraft broke through the Polish defense line along the border, advanced to Warsaw and surrounded the city. After heavy fire and bombing raids, Warsaw surrendered to the Germans on September 27, 1939. Great Britain and France, standing by their guarantee of the Polish border, had declared war on Germany on September 3, 1939. The Soviet Union invaded eastern Poland on September 17, 1939. The last resistance finally ended on October 6th. The demarcation line for the division of Poland occupied by Germany and the Soviet Union ran along the Bug River. 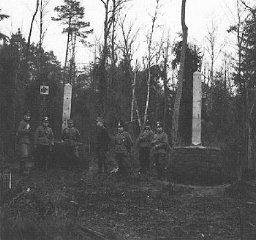 In October 1939, Germany annexed the following former Polish areas on Germany's eastern border: West Prussia, Poznan, Upper Silesia and the former Free City of Danzig. The rest of Germany-occupied Poland (including the cities of Warsaw, Krakow, Radom and Lublin) was subordinated as the so-called General Government to the civilian General Governor Hans Frank, chief lawyer of the NSDAP.

Eastern Poland was added to the General Government after the Reich attacked the Soviet Union in June 1941. Poland was occupied by the Germans until January 1945.