Roman clothing and jewelry always revealed the social status of the wearer in terms of rank and authority. They showed, for example, who was emperor, senator, soldier, Roman citizen, slave, wife or vestal virgin (Roman priestess) and of course who was a gladiator. However, as a rule the clothes of the Romans were quite simple. They wore about two or three items of clothing, plus - not all - sandals. The materials used varied. There was little change or anything like trends in fashion and style during the Roman Republic and the Roman Empire. Contact with the Greeks in the south and with the Etruscans in the north gave the Romans a preference for beauty, which was also expressed in their “flowing robes”. 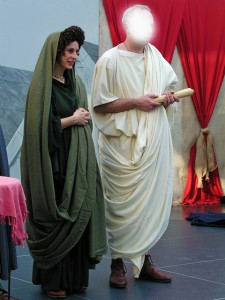 Men in ancient Rome wore toga and tunic. The tunic was a kind of undergarment, while the toga was wrapped as an outer garment (amictus).

There were different types of toga, each with a purpose or symbolism. Roman “luxury laws” dictated which clothes could or had to be worn by whom: the materials and fabrics, the style of the clothes and even the color. For example, only the emperor was allowed to wear a completely purple toga.

Were there differences in Roman clothing?

Clothes for men and women were very similar. At a young age, girls and boys alike wore the toga. Married women wore a robe called a robe stole. This had a wide hem up to the ankles. Prostitutes and women convicted of adultery were not allowed to wear the stole. In contrast to the toga, the stole did not convey rank and name, but only the marital status of the woman. In public it was a symbol of marriage and stood for seriousness, loyalty and adherence to tradition. 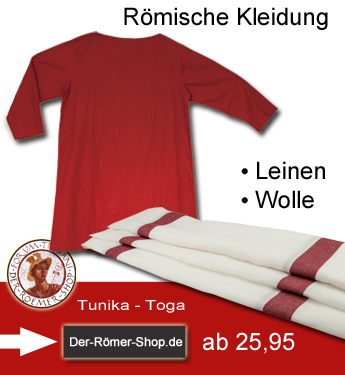 The manufacture of clothing and its materials and fabrics changed over time and was influenced by other cultures. Luxury materials were imported from Roman provinces or from distant countries. So, for example, fabrics came out Egypt, fine linen cotton India or about silk Chinawhich was very rare and extremely expensive at the time. The palette of clothes colors was enriched by elaborate dyeing processes. Some of the dyes were also imported from afar and were very expensive to purchase and process. The most expensive dye was purple taupe. That's why this color stayed the same Clothes of the emperors Reserved. Colors, materials and fabrics that the Romans wore were dictated by the "laws of luxury". A so-called vestio - dressing up - was commissioned with the production of clothing. 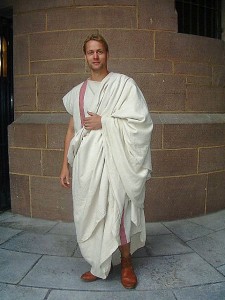 The toga was a loose outer garment of the Romans without sleeves and generally made of one Woolen fabricthat was gracefully draped and precisely wrapped around the body. Usually that was Toga knows. A black or dark toga was also worn in bereavement. Only Roman citizens were allowed to wear the toga. Exiled persons were forbidden to do so. The toga was a semicircular wool vest without sleeves, open from the waist up, but from there closed down to about halfway down the lower leg. The upper part of the vest was pulled under the right arm, over the left shoulder. There it was fixed in a knot with a recogida, where it fell in folds over the chest. This kind of flap was put into the belt and the cavity formed in this way served as a pocket or as a cover for the head for some. The Romans went to great lengths to wrap the toga appropriately and create a dignified cloak.

The Toga palmata got its name after the embroidered palm leaves, a triumphal march implemented in the garment. The Toga picta richly embroidered. Up to the age of 18, young men wore a dress with a purple border, the so-called Toga praetexta. After that, they received the Toga virilis.

The toga picta or toga palmata had a gold-colored hem and was only allowed to be worn by generals during their triumphs. The toga also symbolized peace because soldiers did not wear it. The Roman toga was such an important element of clothing that it is forever associated with the Romans. Any party with the theme of Rome, Romans and Roman clothing will automatically become a so-called toga party even today!

The tunic, on the other hand, is a white woolen vest that is worn under the toga. It reached just below the knee. Most of them were sleeveless. Tunics were fastened around the waist with a belt or strap and thus also served as a "handbag" under the toga.

Both men and women wore tunics. The colored wide stripes or ribbons on the Roman tunic were called latus clavus. Their width and color indicated the wearer's status.

Originally, Romans did not wear pants, socks or stockings as Roman clothing. However, sometimes they wrapped towels around their legs and thighs. This later changed and at least the soldiers wore cloth trousers, especially in the colder northern provinces.

The most worn “shoes” were those calceusthat covered the whole foot, or that solea, a type of slipper or sandal that was fastened under the sole of the foot with a leather strap or cord. The senators' shoes went to about the middle of the leg and had a gold or silver crescent moon on the tip of the shoe.

Shoes of the Roman soldiers were called caligae, Boots that were occasionally studded with nails. 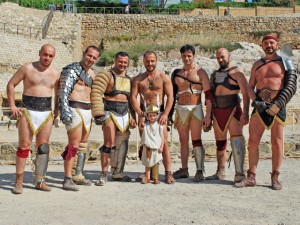 The protective clothing that Roman gladiators wore was designed in many different styles. This is evidenced by descriptions of their armor, including the helmet, a shield and their weapons. When not in the arena, the gladiators mostly wore simple woolen tunics and cloaks. Gladiators who victorious in battle were allowed to keep their reward and could use it to buy expensive clothing, which they wore at public banquets and resold. The most common material for gladiator clothing was leather. They wore matching sandals. The ancient Romans were experts in tanning leather and produced not only supple, but also very durable leather. Gladiator sandals resembled a kind of protective armor for the feet. 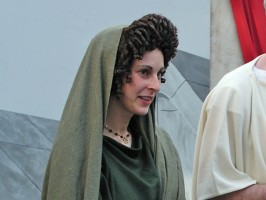 The ancient Romans went through life with “bare heads”, except for sacred rites, games, festivals, traveling or in war. They wore woolen hats or bonnets at games and festivals. Roman farm workers wore a straw hat with a wide brim to protect them from the sun. Women's headwear was also very simple. When they went out, they usually had their faces covered with a scarf or something similar (suffibulum). Wealth and luxury were only reflected in the hairstyles. The hair was anointed with perfume and sometimes dyed bright yellow.

These were also adorned with gold, pearls and precious stones - with garlands or even wreaths of flowers!

The most important garments worn by Roman women were as follows:

Fascia - a simple brassiere (bra) in the shape of a ribbon tied tightly around the breasts on the body.

Nipples - a tight band over the breasts that was tied over the clothes.

Roman women usually wore a simple bra in the shape of a ribbon around their breasts, which Fascia. Over it they wore the tunica or subucula, which was worn like a shirt on the skin and reached about the knee. Usually that was tunic made of wool. Tunics were made in a variety of different shapes and could be worn by people of all classes. They were made with or without sleeves, sewn in different lengths, and made from different types of materials. The tunic of Roman women sometimes even reached to the ankles. A chord or belt was worn around the tunic to support and support the breasts strophium was called. Married women wore a stole over the tunic.

The stole was an outer garment that reached to the floor. The stole was draped around the body in wide folds with a belt above the chest. The stole was also fastened over the shoulder with a fibula or clasp and usually had sleeves. Roman women wore a long scarf over the stole when they went outside Palla. This protected from the cold and rain. Some even had hoods (cucullus). The palla was rectangular and mostly attached over the left shoulder, under the right arm and across the back. It was carried by the left arm or thrown over the left shoulder. The palla could also be pulled up to cover the head. There were also those paenula, a simple form of coat worn by both sexes.

Most of the Roman cloaks were cloak-like. Like many other items of clothing, they signaled the status of their wearers. Cloak cloaks were waist-length down to the ankles. The different capes had different names:

The paenula was a simple form of coat worn by both sexes. It consisted of a piece of cloth with a central hole to pull the habit over your head. It served to protect against bad weather. The paenula was either made of leather (paenula scortae) or from very heavy felt (paenula gausapina). The cheapest materials and the simplest colors were worn only by slaves and workers.

According to legend was made of felt Among other things, through the experience of Saint Christopher, who packed wool in his shoes during a pursuit in order to avoid blisters on his feet. Movement and sweat caused the wool to become matted and so the so-called felt socks were created. "Feltmaking" is still practiced today by nomadic peoples in Central and East Asia, where, for example, carpets, tents such as the Mongolian yurts or clothing are made in a long tradition. Meanwhile, a lot is also being manufactured for the western world and thus for tourism. Felting itself is one of the oldest techniques used to manufacture the aforementioned clothing, generally textiles.

Felt was also used in the past for use on protective shields during the wars. The earliest documented find is around 3000 BC. BC, whereby science assumes that humans had already been able to implement the production of felt around 5000 years earlier.

The Red one sagum Roman soldiers and a scarlet cloak wore the officers. During the Roman Republic and the early Roman Empire, members of the Roman military wore this cloak over armor. The sagum consisted of a simple rectangular segment of fabric, was knee-length, open at the front and fastened with a metal or leather clasp, similar to a safety pin, called a "fibula". The sagum stood for a garment of war, while the toga symbolized peace. The shorter version of the sagum was called sagutum. The sagum worn by the common soldiers was usually dark red while the cloak of higher officers was a more expensive variant in scarlet red. Brown-yellow or blue-gray capes were also worn.

The lacerna was the purple coat the senators wore. It was attached to the shoulder with a large brooch. The lacerna was worn by Roman senators over their toga as protection. Before work in the Senate began, the lacerna was removed.

The so-called laina was a thick wool coat. The laina was doubled at the shoulders and folded with fringes. It was fastened over the toga of a flamen (priest) with a clasp that he wore around his neck.

The pallium was a brightly decorated cloak worn by the rich.

The dent was the mantle of wealthy and aristocratic patricians. It was made of expensive materials.

If you like the article "Roman clothing ”Then we'd think about one Link to this page are very happy and thank you very much in advance.

Exciting Roman information as an RSS feed about "Roman clothing ”Received on your website? Simply click on the orange symbol and integrate the appearing page (www.forumtraiani.de/feed) into your html page. More on this at Wikipedia