How did the Africans accept Christianity

The holy martyrs of Africa: struggle for true freedom

Africa has seen a history of liberation over the past 50 years. After the Second World War, the process of decolonization began. The states of Africa became independent. Unfortunately, millions of Africans subsequently had to endure the arbitrariness of their rulers. But the process has started and will take a long time.
Unfortunately, Europe often does not play a good role here.

But there is also a history of spiritual freedom in Africa. Around 90 percent of Sub-Saharan Africans call themselves Christians or Muslims. Some of them had to walk a difficult path for their faith. The most amazing thing happened in 1885 in Uganda, East Africa. Twenty-two young men were cruelly murdered for refusing to give up their faith in Jesus Christ, whom they had just found. They had accepted him only a few years earlier.

It happened like this: King Mutes welcomed the European missionaries with joy. When he died, his son took control, mistaking the missionaries for spies. The first victim died after admitting to explaining the Christian religion to other young Ugandans. The king stuck a spear in his neck while he was hunting. After an excruciating night, he was finally beheaded. The ruler then decided whoever prays in the Christian sense will be killed. It became dangerous for the young men studying Christianity. They spent a night preparing for questioning by the ruler. Some were baptized that night. The next day they confessed their Christian faith. Two of them were then cut into pieces, the others later tied up in bundles of straw, burned at the stake or beheaded.

You don't want to imagine the cruelty. Mind you: Everyone was asked whether they stand by their Christian faith. They could have made up their minds, could have said that they wanted nothing to do with the faith of foreign Europeans. For whatever reason, they were convinced of their faith and had not denied it. What spiritual freedom!

We Europeans can probably hardly imagine this attitude today. Theologians speak of grace, of the strength that God gives - especially to the small and the weak, to those who think little of themselves and are also viewed rather disparagingly by others. Christ and Christians have probably convinced them.

Conviction usually grows through example. Already in early Christian times it was said: Sanguis martyrum, semen christianorum - the blood of the martyrs is the seed for new Christians. Because only convincing life is convincing. Is that missing today? Is there a lack of persecution and therefore lack of courageous testimony of faith?

Many questions arise, especially in Europe: Is our world experiencing a cultural and social tragedy without noticing it? Are we blind to what is happening before our eyes? Is a spiritual culture collapsing that once produced martyrs?

In addition, one wonders: Why do young Europeans go into a religious war in the Middle East? Are you bored in Europe? Are you looking for a challenge? Could they be indoctrinated because they lacked a spiritual challenge here? Or do you have too many options here that are believed to be freedom? Are we in Europe struggling too little for true freedom? Is the time of real freedom over because we shy away from commitment, commitment? Are we rashly condemning firm beliefs as fundamentalism?

Let us not forget the martyrs of Uganda, please. They died for their belief just 130 years ago. 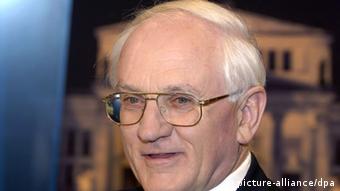 Father Eberhard von Gemmingen SJ was born in Bad Rappenau in 1936. After joining the Jesuit order in 1957, he studied philosophy in Pullach near Munich and theology in Innsbruck and Tübingen in 1959. In 1968 he was ordained a priest. Father Eberhard von Gemmingen SJ was a member of the ecumenical lay movement action 365, episcopal representative at ZDF and head of the German-language editorial team of Vatican Radio. Since 2010 he has been a fundraiser for the German Jesuits.