What if Austria and Hungary were united today? 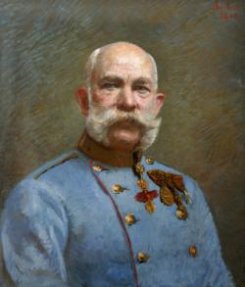 From empire to dual monarchy

In 1867 the Austrian Empire was transformed into the Austro-Hungarian Dual Monarchy. Exactly on March 15, 1867, the new regulation of the new constitutional relationship between Austria and Hungary came into force. Hungary and Austria were both equal states. Emperor Franz Joseph I was crowned King in Budapest on June 8, 1867, and his wife Elisabeth was crowned Queen of Hungary.

A common currency and customs union should guarantee economic unity. Cisleithanien are the countries on this side of the Leitha: Lower Austria, Upper Austria, Salzburg, Tyrol, Vorarlberg, Styria, Carinthia, Carniola, Gorizia, Gradiska, Istria, Dalmatia, Bohemia, Moravia, Silesia, Galicia and Bukowina; they are subordinate to the Emperor of Austria. The name Austria for this area is officially used only in 1915. Transleithanien are the countries beyond the Leitha: Hungary, Transylvania, Croatia and Slovenia (the countries of the holy Hungarian crown of St. Stephen); they are subordinate to the King of Hungary. The designation for common authorities and matters is "k.u.k", that means imperial-royal, for Hungarian only "kgl", ie royal.

The establishment of the dual monarchy brought about a compromise with Hungary, but not the solution of the nationality problem. The Slavs of both halves of the empire also demanded a special position, Russia supported Pan-Slavism. The Hungarians, on the other hand, were not prepared to compromise on the question of nationality. Population distribution in the entire monarchy: 47% Slavs, 24% German speakers, 20% Hungarians.

Emperor Franz Jospeh I led the Austro-Hungarian monarchy almost entirely. After his death (1916) the heir to the throne Archduke Karl Franz Joseph took over the office as Karl I Kaiser of Austria. This was followed by the coronation of Emperor Karl I as Charles IV as King of Hungary in Budapest.

The dual monarchy Austria-Hungary was the second largest state in Europe after Russia. Thus Austria-Hungary achieved a decisive great power. Fertile soils, extensive industry and good transport routes including sea ports were decisive for the good economic situation in Austria-Hungary. Foreign trade only rarely had to be used.

However, in the large multi-ethnic state there were always disputes and disputes between Austria and Hungary, which were decisive for tense conditions. Although Emperor Karl was the head of both states, he was unable to assert himself through domestic political parties. Although a balancing policy between Austria and Hungary was important to him, his heir to the throne, Archduke Franz Ferdinand, did not see this as too important and announced that the dual monarchy Austria-Hungary would be reorganized when he took office.

However, Franz Ferdinand was also at the mercy of the multi-ethnic state. During his visit to Sarajevo in 1914 with his wife Sophie, they were murdered by bullets. This led to a serious crisis and is considered to be the beginning of the First World War. All of Europe, and ultimately almost the whole world, was now in a bloody chapter of history. On October 31, 1918, Austria-Hungary dissolved and on November 1, 1918 Hungary formed an independent government. On November 11, 1918, the guns fell silent. In addition, Emperor Karl I agreed to the publication of a manifesto to the Austrian people by renouncing the exercise of government business. The government formulates a motion to the provisional national assembly to establish a democratic republic.