Is Kazakhstan a poor country

For cultural reasons, Kazakhstan is counted among the Eastern European states, although only a little more than 5 percent of its land area is in Europe, while most of it is in Central Asia. The total land area of ​​Kazakhstan is a good 2.7 million square kilometers, on which almost 18 million people live. The spelling of the country name in Kazakh is Qazaqstan in Latin letters. The capital of the country is Astana. It has only had this name since 1999 and was previously called Aqmola. Astana is simply the Kazakh term for a capital. The second cultural center in the country is the city of Almaty. Kazakhstan borders with Russia, Turkmenistan, Kyrgyzstan, Uzbekistan and China. Kazakhstan is one of the landlocked European countries. It borders the Caspian Sea as the largest body of water in the country, but this is an inland lake that is not connected to the oceans. With an area of ​​386,400 meters, the Caspian Sea is also the largest inland lake in the world. Kazakhstan's coastline on the Caspian Sea is 1,894 kilometers. Furthermore, there are 1,070 kilometers of the coast of the Aral Sea on Kazakhstan's territory. In addition to the two large lakes, there are numerous other inland lakes in Kazakhstan, most of which are salt lakes.

Kazakhstan on the map of Europe

Illustration: Map of Europe (Kazakhstan highlighted in color)
The highest mountain in Kazakhstan is the 7,010 meter high Khan Tengri in the Tian Shan Mountains. This lies in the country triangle with China and Kyrgyzstan (Asia). The longest river in the country is the 4,248 kilometer long Irtysh, which flows 1,700 kilometers through Kazakhstan. It rises in the part of the Altai Mountains belonging to China and flows into the Ob in the Russian city of Khanty-Mansiysk. The most famous river in Kazakhstan is the Schajyq, known in German as the Ural. This rises in the Russian landscape of the southern Urals and flows into the Caspian Sea near Atyrau in Kazakhstan, forming several estuary arms. The total length of the Schajyq is 2,212 kilometers, 1,100 kilometers of which run on the territory of Kazakhstan. According to a common definition, the Schajyq or Ural is a border river between Asia and Europe. 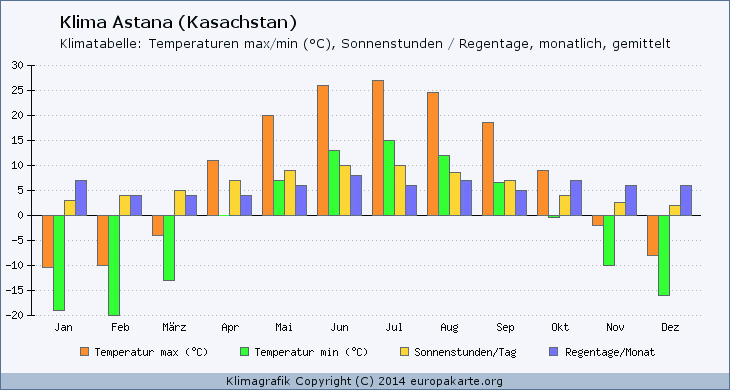 Kazakhstan in comparison with European countries