What is quantum domain physics

Blurred arrow of time: The passage of time may be less predetermined than expected. Because quantum physics can make the temporal sequence of events indefinite or even reverse it, as theoretical considerations now suggest. In a thought experiment, the researchers demonstrate that, under certain conditions, time is also subject to quantum physical phenomena such as superposition and entanglement.

Time only knows one direction: it always runs forward - at least that is the classic assumption. Because entropy makes many causal processes in our world irreversible, which is why, for example, a broken glass does not reassemble itself again. Since Einstein's general theory of relativity, however, we have known that the gravitational effect of large masses can stretch time. A clock therefore runs a little slower in the valley than on a mountain top - you can measure that.

But how does time behave in the realm of quantum physics? As is well known, this overrides some of the rules of classical physics and allows exotic phenomena such as the superposition of states or the entanglement of particles. Could such phenomena also affect the passage of time? In fact, in laboratory experiments, researchers have shown that quantum particles can briefly reverse the entropy and thus the time course.

So far, however, it has remained unclear whether quantum processes can also be effective when gravitation influences time. This is exactly what Magdalena Zych from the University of Queensland and her colleagues have now investigated in a thought experiment. “Our starting point was the question of what a watch would measure if it were overlaid under the influence of a heavy object,” explains Zych. For example, if the distance to this object is indefinite due to the overlay - would the time dilation also be strong and weak at the same time? And what consequences would this have for temporal processes, the outcome of which depends on this time expansion? 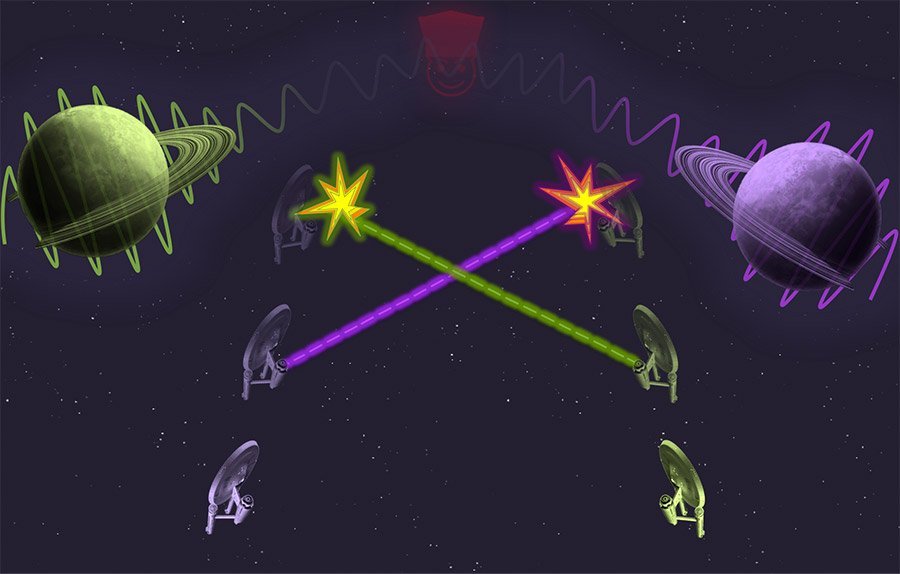 What happens when heavy objects like the planets here are in an overlapping state? Does this also affect the time expansion and thus the safety of the spaceships? © Magdalena Zych, Igor Pikovski

The researchers have now investigated this in a thought experiment. Their considerations can be illustrated by the following scenario: Two spaceships float in space, firing at each other at predefined times. The other ship knows exactly what time this attack will take place and therefore evades at this point in time. However, when this spaceship gets into the gravity of a planet, its gravity stretches the local time - and the ship's on-board clock slows down. As a result, the spaceship evades too late and is destroyed.

But is such a quantum physics scenario compatible with the physics of spacetime? This is exactly what Zych and her team have theoretically calculated. The surprising result: in fact, the laws of physics allow quantum physical phenomena to influence time in this way. The researchers report that time can also have features of superposition and entanglement.

“The sequence of events can become quantum mechanical,” explains co-author Igor Pikovski from the Harvard-Smithsonian Center for Astrophysics in Cambridge. No new physics is necessary to achieve this. "The results are based entirely on the well-established general theory of relativity and quantum mechanics," the researchers say. The thought experiment suggests that quantum physical phenomena are also possible in the context of spacetime.

However: In practice, superposition and entanglement can only be observed with microscopic particles. Because with macroscopic objects, these quantum states collapse too quickly due to disturbances. For real spaceships, the thought experiment will therefore probably never come true.

But this is different for quantum computers: For them, the new findings could open up completely new computing possibilities, as the researchers explain. Because quantum computers that use a computational sequence with quantum properties could outperform devices that only work with fixed sequences. (Nature Communications, 2019; doi: 10.1038 / s41467-019-11579-x)