How proud are the Armenians to be Aryans

Discussion about genocide against Armenians: it was "genocide"

Federal President Joachim Gauck called the death of up to 1.5 million Armenians in 1915 “genocide”. Bundestag President Lammert repeats the words. 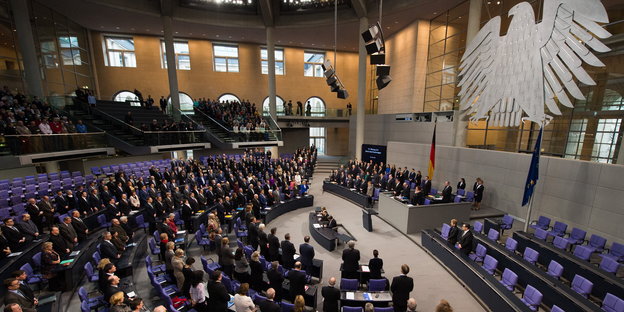 Out of consideration for Turkey, the German government has so far avoided the term “genocide”. Image: dpa

BERLIN / ERIWAN / ISTANBUL dpa / afp / ap | After the clear words of Federal President Joachim Gauck on the massacres of Armenians in the Ottoman Empire, it is now the turn of the Bundestag. On Friday, on the 100th anniversary of the atrocities, parliament is debating a declaration for the first time in which the event is described as genocide. Out of consideration for Turkey, Germany had so far refrained from using this term. Bundestag President Norbert Lammert (CDU) said in the Bundestag on Friday morning that the crime against the Armenians “was genocide”. The new line is likely to be an endurance test for the German-Turkish relationship.

On Thursday evening, Gauck spoke of genocide at an ecumenical memorial service in Berlin. The head of state disregarded concerns that this classification could damage relations with Turkey. At the same time, Gauck - like the Christian churches - admitted German joint responsibility for the atrocities committed against the Armenians.

During the First World War, Armenians in the Ottoman Empire were systematically expelled and killed as alleged collaborators. It is estimated that between 200,000 and 1.5 million people were killed. As the successor state of the Ottoman Empire, Turkey vehemently rejects the term genocide.

A large commemoration ceremony will be held in Armenia's capital Yerevan on Friday, which will also be attended by foreign state guests. The ex-Soviet republic calls the atrocities genocide. Kremlin chief Vladimir Putin and French President François Hollande are expected to attend a central ceremony with Head of State Serzh Sargsyan. Hundreds of thousands of Armenians want to lay flowers at a memorial in Yerevan. The Armenian Church collectively canonized the victims on Thursday evening and elevated them to martyrs.

Gauck said: “The fate of the Armenians exemplifies the history of mass extermination, ethnic cleansing, displacement, even genocide, which has so terribly marked the 20th century.” He added: “In this case, too we Germans as a whole face up to the reappraisal once more, namely when it comes to a joint responsibility - possibly even complicity - in the genocide of the Armenians. "

Dispute over the choice of words in the Bundestag

Because of the dispute over the choice of words, there had been some back and forth between the federal government, coalition parties and the presidential office in the past few days. The federal government wanted to avoid the term. Gauck now used almost word for word the formulation that had been agreed upon for the declaration in the Bundestag. This text goes to the committees after the first discussion in the plenary and is to be finally adopted by the summer break. The text does not go far enough for the opposition from the Greens and the Left Party.

The Central Council of Jews in Germany assesses the new line of German politics positively. "It is correct that now, after the Pope, the Bundestag is also calling this terrible crime by its name," said President Josef Schuster Passauer Neue Presse (Friday). "What happened a hundred years ago in the Ottoman Empire, the deportation and murder of more than a million Armenians, was genocide." Now Turkey must deal with it openly and honestly.

Because of a declaration by the Austrian parliament on Armenia, in which there is talk of genocide, Ankara ordered the Turkish ambassador in Vienna back for deliberations. The Turkish Foreign Ministry criticized the declaration on Thursday that it would "permanently tarnish" the Turkish-Austrian friendship.

Criticism of the Turkish media on Gauck

And the Turkish media also reacted to the Armenian speech by Federal President Joachim Gauck, in some cases with sharp criticism. Gauck's statements were "shocking," wrote the newspaper's online edition Hürriyet on Friday. The pro-government newspaper Sabah accused Gauck of having described the Ottoman Empire with "ugly words". With the likewise pro-government sheet Yeni Safak it was said that Gauck had exceeded his authority with his speech. The newspaper star commented that the German president almost described the Ottomans as terrorists.

The Turkish head of state Recep Tayyip Erdogan categorically ruled out that his country's ancestors had committed genocide in the Ottoman Empire. "The Armenian claims about the events of 1915 are unfounded," he said on Thursday at an event in Istanbul that had been announced as a peace summit. “I say we are ready to open our military archives. We are not afraid, not worried about this. Our ancestors did not commit any persecution. ”As the successor to the Ottoman Empire, Turkey has been resisting the genocide allegations for decades. Ankara considers the number of victims to be excessive and denies the systematic killing.

US President Barack Obama pledged solidarity with the Armenians, but did not use the term “genocide”. "At this grave centenary, we stand by the Armenian people in remembering what has been lost," said Obama. "We swear that those who have suffered will not be forgotten." As a Senator and presidential candidate, Obama had described the massacre as genocide. Since taking office, however, he has been reluctant to do so, mainly out of consideration for Turkey, an important US ally.