In the last quarter of last year, before the Corona crisis, Japan's economic output had already declined compared to the same period of the previous year. If this happens two quarters in a row, economists speak of a recession.

The export industry was hit particularly hard. Exports collapsed by 6.0 percent. The pandemic has massively disrupted supply chains and companies around the world, and this is particularly noticeable in trade-dependent countries like Japan.

The decline in the first quarter was less than what economists feared. But as in Germany, economists in Japan also expect that the low point of the crisis is not yet over: "The second quarter will be much weaker," predicts Martin Schulz, chief economist at the technology group Fujitsu in Tokyo.

Japan had already started the new year weak. Due to an increase in VAT, the decline had already occurred in the final quarter of 2019. "Japan's economy is facing the greatest crisis of the post-war period," stated Prime Minister Shinzo Abe. Some economists are anticipating an upswing again in the second half of this year. But whether there will be a big leap is questionable. 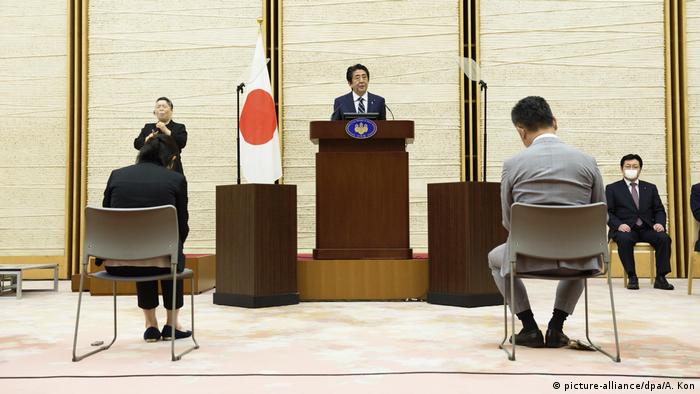 Unlike in Germany and many other countries, there was no lockdown due to the corona crisis in Japan. The restrictions took place gradually and were gradually adapted to the situation. The state of emergency proclaimed in April did not mean a harsh isolation like in Europe, the citizens were only called to stay at home as much as possible. Yet millions of Japanese continued to go to work. In the meantime, the state of emergency has even been lifted prematurely for large parts of the country.

Despite the huge national debt, the government launched the largest economic stimulus package of all time and helped companies early on with loans and deferred taxes, among other things. There was no slump in unemployment. And yet there are cautionary voices, for example from Naoya Oshikubo, chief economist at the financial services provider Sumi Trust: "We expect the worst to come."