Why is Harry Potter so popular

Harry Potter: How the Sorcerer's Apprentice Idea became a bestseller

At first there were just a few loose ideas for the story of Harry Potter the Sorcerer's Apprentice. When Joanne K. Rowling began to hatch her fiction epic, she had no inkling of her subsequent success. In the early 1990s, the British writer put the first storylines and drawings on paper. With limitless imagination, she worked out a thoroughly magical world whose quirky characters would later cast a spell over millions of people.

Fans of the mysterious story of Harry and the Hogwarts School of Magic can now get an idea of ​​the beginnings of the Potter saga: The book "Harry Potter. A story full of magic", which will be published in German on Thursday (May 31, 2018), contains among other things the best-selling author's earliest drafts. They show how concrete Rowling's ideas of the fantasy world were even then. 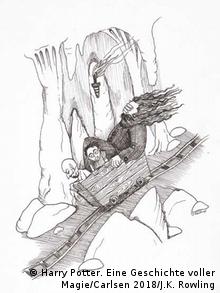 Harry and the half-giant Hagrid

There is, for example, the drawing of Professor Pomona Sprout, a small, plump witch who teaches herbalism at Hogwarts. Or the portrait of Almost Headless Nick, the cheerful Gryffindor ghost. And of course the first sketches by Harry Potter himself, for example with his uncle Vernon, his aunt Petunia and his cousin Dudley, all of them "Muggles", i.e. people without magic powers. But Harry's friends at Hogwarts, Hermione Granger, Ron Weasley, Neville Longbottom and the friendly half-giant Rubeus Hagrid also took shape and character at an early age.

With the new volume, lovers of the Potter books can once again immerse themselves deeply into Rowling's magical world. When looking at the drawings and sketches, memories of the very personal first encounters with Harry and Co. are awakened. A real journey back in time, because for many fans reading it was probably a few years ago, especially that of the first book "Harry Potter and the Philosopher's Stone", which was published in German translation almost 20 years ago in July 1998.

A year earlier, the original English edition was published in Great Britain with a first edition of just 500 copies. The first Harry Potter volume has now been sold over 500 million copies and has been translated into 80 languages. This makes "Harry Potter and the Philosopher's Stone" one of the world's most successful books of all time.

The fact that Harry's entire, fantastically spun story once began with a few sketches and notes is all the more impressive against this background. Joanne K. Rowling worked on her idea for seven years until the first volume was published. In this respect, the book "Harry Potter. A Story Full of Magic" is also an homage to the author and an appreciation of her diligent, passionate work.

All images come from the volume "Harry Potter. A story full of magic", which will be published by Carlsen in Hamburg on May 31, 2018.