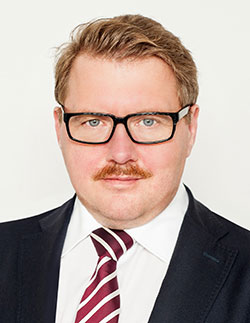 Carsten Heinrich (CH): Germany has an attractive real estate market with entry prices that are still low compared to other European metropolises. Added to this is the economic, political, social and ecological security in Germany, which creates stable framework conditions for real estate investments. The development of the real estate market and the forecasts are very stable in this country. The capital Berlin also enjoys a high reputation in the Far East, Berlin is internationally known as "hip", which is also favored by the massive growth of the startup scene in Berlin. In general, Germany enjoys a good reputation in the Far East - across all segments of the population.

IA: China is a huge country with great potential. How is the real estate market doing there?

CH: China is a country of superlatives, 1.4 billion people live there. Almost 170 cities have more than a million inhabitants. China is the second largest economy in the world. There has been very strong price growth in the private investor real estate market in recent years. For example, an apartment in Beijing costs an average of over one million euros; in the case of renting, the return is 2.5 percent. The ownership rate is high at 95 percent, because your own property is both a livelihood and a status symbol.

IA: The Chinese government fears that real estate prices will rise in Beijing. As a countermeasure, the government has introduced new laws that have been in force since March 2017. The down payment obligation for investors for second properties has been increased from 50 to 60 percent, and a home loan is only granted when buying a property for the first time. Are there any barriers for the Chinese to invest here?

CH: No, actually none. The only problem worth mentioning is getting a lot of money legally from China to Germany. China fears that capital will flee abroad and has imposed strict requirements. There can also be cultural hurdles; this topic is often very relevant for the Chinese. Of course, we try to keep these barriers as low as possible. As for the often criticized German bureaucracy, the high number of regulations and laws in Germany, many investors also have a feeling of security and continuity. Of course, there is a great need for advice, which is also demanded to a large extent by Chinese investors.

IA: How do investors from China find their way on the German real estate market?

CH: Of course, cultural differences are noticeable. Chinese buyers initially require more advice on legal and tax issues. The buying behavior of Chinese investors abroad is different. They don't buy here, they leave the apartment empty for years and sell it again for more money. One should never make the mistake of underestimating Chinese customers. There is a massive need for information and also a high demand for service. Documents usually have to be translated into Chinese. We employ native speakers to avoid the language barrier, which is very helpful and well received by customers. It is also important that the Chinese use Wechat for communication and not Google. In addition, there is the great importance that the Chinese attach to the cultural framework of a conversation. Serving tea during the talks is therefore a must!

IA: Returns on real estate investments are up to 8.43 percent in New Zealand and up to ten percent in the US. Berlin stands at four to six percent. So that would not necessarily be a criterion.

CH: But Berlin is considered a safe investment location in the middle of Europe. Berlin is also hip and multicultural, which means that you can get along well with English. The city is well developed in terms of infrastructure and has a large, varied cultural offering. Unfortunately, one disadvantage is that the city is not well connected for the Chinese. There are no direct flights to Shanghai or Hong Kong. Hopefully that will change in the future. Another positive aspect: the properties can be resold after ten years without having to pay profit tax. Owning for life and thus the possibility of inheriting a property is also very important for the Chinese.

CH: In fact, we have often had customers who wanted to buy in Berlin's “business district”. We then had to explain that Berlin has several centers, such as the Gendarmenmarkt, Potsdamer Platz or Kurfürstendamm. The customers are often based on the typical characteristics of metropolises, such as airports, shopping centers, cultural and political centers. Of course, the purchase motive also plays a major role. When customers buy apartments for their children who are to study in Germany in the future, they buy apartments near the universities.

IA: Tenant protection is a very important issue here, in the People's Republic the laws are much stronger on the landlord's side. Is German tenancy law an inhibition threshold for investors from China?

CH: We often have to dispel prejudices and misinformation. In the past, the Chinese media have reported several times about difficulties with renting nomads in Germany. With a proper explanation, the German tenancy law does not actually represent any inhibition threshold. Even German investors often have to be explained the tenant modalities. Since the Chinese investors are interested in a trouble-free and safe investment, they naturally attach great importance to trouble-free letting.

IA: What requirements do investors from the Middle Kingdom have, and who are actually the people who are looking for real estate in Germany?

CH: In principle, investors from China have the same requirements as any international investor

CH: Stability, city location, yield, resale value. Things like Fengshui play a subordinate role, but can certainly be important. It happens that when choosing a location, locations in the vicinity of cemeteries, train stations, hospitals, problematic and red-light districts are avoided. We ourselves usually deal with people who belong to the upper middle class in China. You have international business experience and are involved in many networks. Most of them already own real estate in China and operate in foreign real estate markets. The majority of our customers are between 35 and 50 years old and have an academic degree.

IA: Is real estate in Berlin a new status symbol in China, or what image does Berlin especially have among China's middle class?

CH: Yes, you can definitely say that a property in Berlin is a status symbol in China. The dynamic development on the Berlin real estate market and the increasing demand that will continue in the future make Berlin, as a tenant city, a top location for investments. Nowhere else in Germany will so many apartments be needed in the coming years as in Berlin. You can say that Berlin is one of the most sought-after metropolises in the world.

IA: Can you say something about the ratio of capital investment to personal use, so: Are the Chinese moving their main residence to Berlin, for example?

CH: Less than five percent of investors have their main residence in Berlin. Whereby buying real estate in Berlin is playing an increasingly important role for the children. The German education system has a high priority in the Far East, and the tuition fees here are very low by international standards.

IA: The study says that the steadily growing middle class is increasingly interested in high-yield investment opportunities. As early as 2022, 76 percent of the Chinese urban population will belong to the middle class, that is more than 550 million people. Let's imagine that everyone buys a two-room apartment in Germany: Can the Chinese shake up the German market?

CH: If that were the case, then we really would no longer need a state-subsidized housing program. This is not the case and it will never happen. One must not forget that supply and demand also play a major role here and that one is guided by it. This is the basics of market economy. For the Chinese, it is still the most important thing to buy an object in China first. Which is perfectly natural even on closer inspection. In addition, Germany is still behind the USA, Canada, Australia, New Zealand, Thailand and Portugal as investment destinations.

IA: And then there are the Credit Suisse figures: The Swiss expect the number of millionaires to increase by 74 percent to 2.3 million millionaires by 2020. Will Europe be overrun by the Chinese?

CH: Here, too, the general rule is that the Chinese finance their luxury in Asia and invest there in real estate and possibly other luxury goods such as cars, watches and art. In addition, as mentioned, other regions are sometimes even more interesting. We shouldn't always pretend that Germany is the center of the world. First it was said that the Russians were storming the market, then the Arabs, now the Chinese. From my point of view, scare tactics are completely out of place here.