Emerald is the most beautiful gemstone

Colored gemstones inspire us with their radiance and their splendor of colors. We have a small overview of the most beautiful gemstones for you: 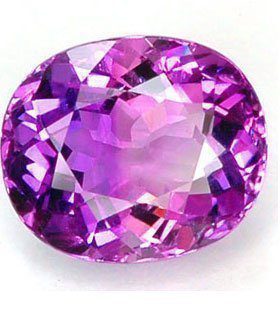 The Greek word αμεθυστος gave this gem its name. Translated it would mean "counteracting the intoxication", which stems from the fact that this stone was used in the belief - and in homeopathic circles it still is - to combat drunkenness or intoxication, especially through wine. This belief probably stems from the color that wine takes on when diluted with water.

Color: The color of amethysts ranges from pale pink to dark purple, the purple in particular is characteristic of it and, together with its crystalline natural form, gives it an easily recognizable appearance and makes it a beautiful gemstone.

Assignment and localities: The amethyst belongs to the quartz, to which, for example, rock crystal also belongs. The purple mineral is found in many places around the world, but there are only a few deposits that are suitable for jewelry making, for example in Brazil, Uruguay, Mexico, Madagascar and Australia.

Meaning: The stone is part of the Roman Catholic bishop's ring. In the Christian context, the violet stands for Advent and Lent, but also for penance and conversion. In esoteric circles it is said to heal and protect against addictions and maintain concentration and inspiration. 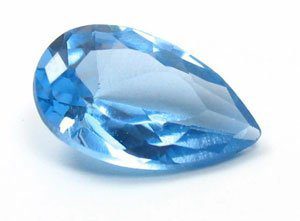 “Aqua marina” - the sea water, in Latin. And the aquamarine looks like a solid piece of sea water.

Color: As the name suggests, the aquamarine can usually be found in transparent, light blue tones or in turquoise. Since a deep light blue, which is probably the most beautiful color of the stone, is rarely found, the color of the stone is often subsequently enhanced by heat treatments. However, a subsequent, uncontrolled influence of heat can also make the color paler.

Assignment - localities: The aquamarine belongs to the beryls, a hexagonal mineral variety. It is found especially in granite formations and river sediments, especially in South and Northwest Africa, Brazil, Central Asia (especially Afghanistan and Pakistan) and in parts of Southeast Asia. A specimen found in 1910 and weighing more than 100 kg caused a sensation.

Meaning: The aquamarine is a popular wedding stone because it is supposed to make its wearer happy and wealthy. According to the traditional interpretation, the light blue arouses sympathy for the wearer and promotes friendship. 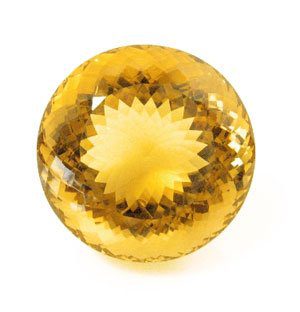 If you think of a lemon when you hear the name “citrine”, you are not so wrong, the name actually has its origin from the Latin “citrus”, for lemon. Another common name is "gold topaz", which, however, runs the risk of equating citrine with real topaz, which is much more common.

Color: As the name suggests, a pale to light yellow color is characteristic of the citrine. But there are also stones with orange or even brownish-orange hues, which can almost be reminiscent of amber.

Assignment and localities: Occurrences of real gold topaz are not particularly common, can be found in Europe in France and Spain, outside Europe in the USA, Brazil, Argentina, Burma and Russia. Since the citrine as quartz is related to the amethyst, citrine can also be found again and again in amethyst deposits.

Significance: Due to its rarity, most of the commercially available citrines are made from other quartz, for example amethyst. Citrines are said to have a cooling and hemostatic effect. The citrine has a protective function in which it protects the wearer from anger, sadness and fear, if not even from unexpected death. It is also said to make sterile women fertile. - 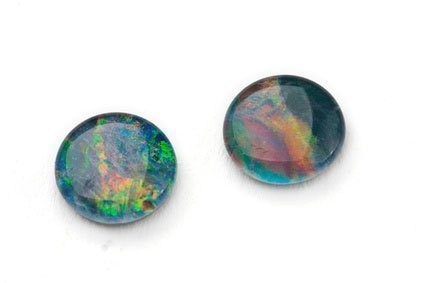 The opal is a dazzling figure among the stones. The origin of the name, which has not yet been fully clarified, is mostly searched for in the Sanskrit word “upala” for “noble stone”.

Color: The Roman historian Pliny the Elder knew about the opal: "It has a fire, finer than that in the carbunculus, it has the purple spark of the amethyst and the sea-green of the emerald and an unbelievable mixture of light." Indeed, a unique iridescence is a characteristic of the opal, which permeates its often dark color, which ranges from black to blue. But there are also known occurrences with light shades or even with white coloring.

Assignment and localities: An interesting aspect of the stone is that it can consist of up to 20% water. The main locations are Australia and Brazil.

Meaning: The opal is and has always been used and coveted exclusively as a gemstone. Its unique blaze of colors represents the human emotional world: shimmering, sometimes blurred and different with every new look. Different types of opals are recommended to different zodiac signs as a reinforcing element of their properties. The stone is also said to drive away sadness and depression and especially to help women to find true love. 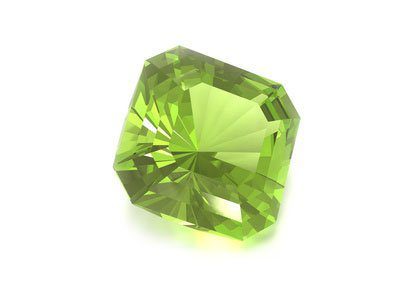 The color is very similar to the emerald, but the peridot is of its own beauty and quality. Already in the 2nd millennium. B.C. Promoted on an island in the Red Sea, it conquered Europe to a special degree through the Crusades, but it was already known and coveted by the Romans, who called it the "emerald of the evening".

Color: Similar to the emerald, the peridot is a strong green, although its expression varies greatly and tends to be lighter in color, but it is always green.

Assignment and sites: The peridot is actually a particularly pure form of the oliving group, a mineral group that make up the main component of the upper earth's mantle and are therefore very common, but not their purest form, the peridot. This is mainly found in Pakistan, Afghanistan, Australia, Burma, Brazil and Norway. 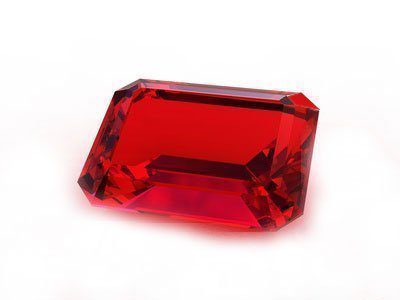 "King of precious stones" is what Sanskrit calls him - "ratnaraj". And indeed it is a princely, even royal stone. It is very popular all over the world and is one of the most valuable stones of all. The name ruby ​​itself comes from Middle Latin, from the word "rubinus" for "red".

Color: The ruby ​​can be found in all red variations and is particularly impressive due to its intense, strong colors.

Assignment and sites: The red - and only the red - varieties of the mineral corundum are referred to as rubies. Pink and blue features are known as sapphires. Rubies have been known and valued in Southeast Asia, especially in India, since the Bronze Age. The rubies were also known in the Mediterranean region. Today rubies are found particularly in Burma and other countries in Southeast Asia, as well as in Australia, Brazil and Afghanistan.

Meaning: The ruby ​​is exclusively a gem and has always been a sign of royalty and princely, but also the epitome of passionate and burning love. It competes with emeralds and diamonds for the place of the most valuable stones and is also the second hardest mineral in the world. 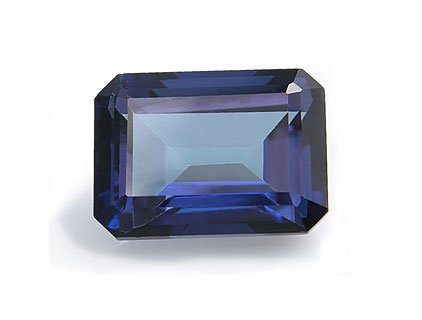 The sapphire is the brother of the ruby. It is also a variety of the mineral corundum in many different colors, apart from red. It is one of the most famous gemstones in the world.

Color: The sapphire appears in many colors. Yellow, orange, white and purple sapphires are known. But the most popular are the stereotypical, royal blue sapphires.

Assignment and sites: Like the ruby, the sapphire is also mined as part of the corundum mineral in Burma and Southeast Asia, but also in Brazil and Australia, in the USA and Nigeria.

Meaning: The deep blue associated with the sapphire stands for loyalty, friendship and sympathy. He symbolizes feelings of long duration, which are not shaped by the fire of short loves or passions but are fed by patience, mutual trust and understanding. The blue conveys calm and serenity, also stands for peace and the longing that every person feels, even if he has already found his love happiness. Hairline cracks and small channels in the stones can create special shiny effects, such as a six-pointed star. The largest of these "star sapphires" was found in Burma in 1966 and weighed 12.6 kg. 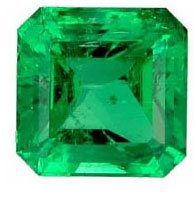 The emerald and its characteristic green color will be familiar to everyone. It is one of the most valuable gemstones in the world. “ΣμÎ¬ραγδος” - “smaragdos” is the Greek name of this stone, but there are also good reasons to look for the origin of the name in the Semitic language area, in Hebrew or Akkadian.

Assignment and sites: The emerald is the crowning glory of the beryl group, the mineral group to which aquamarine also belongs. The gemstone can be found in the mountains of Colombia and the Ural Mountains, in Brazil and - in smaller quantities - in Austria and Norway.

Meaning: As a gemstone, the emerald with its unique green stands for life, hope and spring, which never dies. As soon as nature is eternal, this green should embody the eternal existence of hope, beauty and love. The cycle of recurring being, of dying from which life again emerges, are also expressed in it. 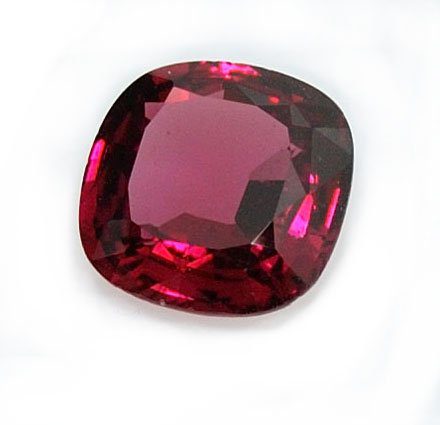 Until it was clear that sapphire and ruby ​​belonged to the mineral corundum, it was difficult to distinguish between rubies and garnets. Garnets and rubies were previously known simply as "carbuncle stones".

Color: Usually the garnet is red, but it can come in many other colors, just not blue. The stones with a different color sometimes have their own names.

Assignment and localities: Garnets are part of a mineral group from the class of silicates and have magnetic properties. Today most of the grenades come from Sri Lanka, the USA and South Africa. 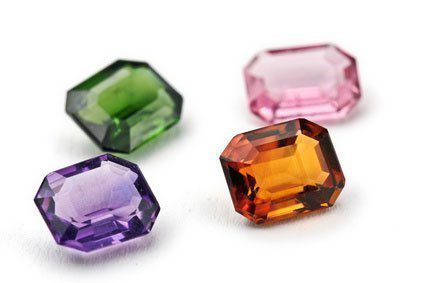 The etymological origin of the name is not entirely clear. The stone is often equated with citrine, which, however, belongs to a different mineral class.

Color: The color is typically yellow, but it can also be red, pink, blue and greenish. Colorless topazes are also not uncommon. Topazes in a strong blue are particularly valuable.

Locations: Important countries for topaz extraction are Australia, Brazil and the Russian regions around the Ural Mountains. Meaning The topaz is said to have similar properties as the citrine, and it is said to have an appetizing effect. A very well-known, colorless topaz, the "Braganza diamond", was mistakenly believed that a diamond had been found in the crown of the Portuguese king after it was found in the Portuguese colony in Brazil.