What is a feces from

Feces are what living things cannot digest and then release from the intestines. In humans, the feces are also called “stools” because you sit on the toilet like on a chair. Getting rid of the feces is therefore the bowel movement. In colloquial language, there are many different expressions for this, depending on the region. The technical term for this is: faeces. Feces and urine together are excrement.

Originally, excrement meant all the dirt that was on the streets. In the Middle Ages, people simply threw the excrement from the chamber pot on the street and waited for the rain to wash it away. Even today every car has a fender over every tire. This is a sheet of metal in the shape of a wing. That should prevent the excrement or simply the dirt from the streets from splashing around everywhere when driving over it.

With many animals one speaks of "dung". This applies above all to animals with hooves, i.e. horses, cows and camels. When the animals stand in a stable and the manure mixes with straw, it becomes manure. So that the animals in the barn do not get sick from their own droppings, the barn must be mucked out regularly. The soiled straw is collected with the pitchfork and replaced with new, clean straw.

Feces mainly consist of the remains of food that the body could not digest and water so that it forms a soft mass. About a quarter of the feces are bacteria that it needs for digestion. Feces can be of different colors and can also be of different softness. This is mainly due to what you have just eaten. Various diseases can also change the feces. If the manure is very soft and almost runny, it is called diarrhea. If, on the other hand, you cannot go to the toilet at all for several days, one speaks of constipation. If both cases occur longer or more frequently, a doctor should be seen. 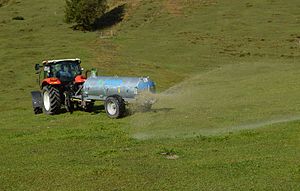 This farmer is spraying liquid manure on a meadow. That is the liquid droppings of his cows. He uses it to fertilize his field.

First of all, excrement is necessary because no living being can retain everything in itself. But it also has useful properties. Many animals partially feed on the droppings of other animals, for example certain insects. Often you can see whole swarms of flies on horse droppings. Some animals even eat part of their own droppings because of the vitamins in them.

People in the desert use dried dung to make fires. This mainly affects camels, but also elephants. Farmers bring the manure to their fields because it is a good, free fertilizer. Manure mixed with urine and perhaps also with water is called “liquid manure”. The farmers also spray these on the fields.

Many plants use the animal's droppings: They form seeds with a very strong shell that is not digested. The seeds are then intact in the feces. So they are distributed much further around than if they simply fall to the ground. This works particularly well when birds distribute the seeds. For example, they carry cherry stones far away from the cherry tree.

Many mushrooms also like feces. They grow as an invisible network through the excrement and break down certain parts of it. They help significantly that the manure becomes fresh humus again. This is earth on which plants can grow again.

Where is feces harmful? 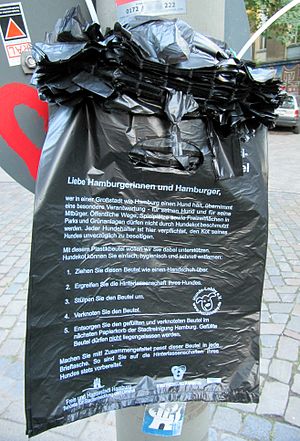 Every dog ​​owner should always have such bags for dog waste with them.

Feces themselves do not harm, but certain bacteria that live in them do. They are called "fecal bacteria". They can make a person sick. This can end harmlessly or become very bad. That is why wastewater is treated in a sewage treatment plant before it returns to a river.

You also have to be careful in the swimming pool. There, toddlers have to wear special diapers. Nevertheless, there are also faecal bacteria in the bathing water. You can't wipe your bottom so clean after a bowel movement that nothing is left there. Therefore you have to add chlorine or other chemicals to the bathing water. There are also swimming pools with biological cleaning. Tiny creatures and plants do the cleaning work there.

Particular caution is required in hot countries. There the manure dries very quickly in the sun. The wind then carries away the bacteria and these can land on the neighbors' food. That is often enough for an illness. The droppings should therefore be buried in this case.

In nature, feces are usually not a problem because there are many small living things that can break them down. Wild animals just leave him on the ground. Some animals then dig in the clean earth with their paws and cover their droppings with something like that. In the cities, however, it is different, especially the faeces of dogs there cause problems. It stays on a stone floor for a very long time because there are no small living things to dismantle it. And nobody wants to get in there with their feet. There are therefore special bags made of plastic, which are called "dog waste bags". One slips such a glove over one's hand, grabs the dog's excrement and pulls the bag over one's fingers. Then all you need is a knot and you throw the bag and its contents in the bin. Dog feces are burned like the rest of the waste.