How much do military drones cost

Model components in military drones: toys with the potential for conflict

Parts for model airplanes, which are actually intended for hobby pilots, are built into military drones. The state does not control their export. 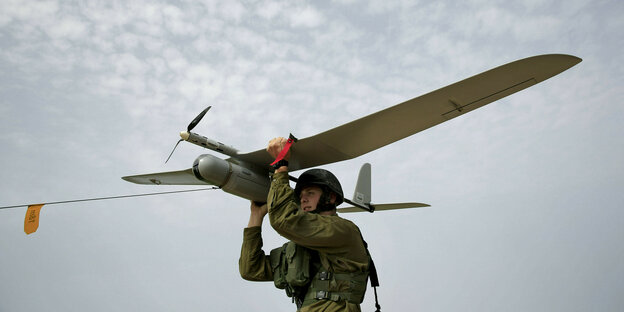 BERLINtaz | On June 25, 2020, the Myanmar military lost a drone. The unmanned reconnaissance plane crashed near the town of Rathedaung, in the state of Rakhine, where the army has been using violence against the Rohingya minority for years. It is difficult to verify what exactly happened that day. Local rebels speak of a battle, dead soldiers on one side and a seriously injured civilian on the other. There is no proof of this, the only thing that has been proven is that at the end of the day, the fighters had captured their opponents' drones.

On the same evening, the rebels presented two photos of the device on their website. It has a narrow fuselage, wings two meters wide, and a camera eye at the top. And as a propeller, recognizable by the inscription for experts: a propeller from the Swabian Alb - manufactured by a company that actually does not want to have anything to do with arms exports.

The photo indicates one of the problems caused by the rapid rise of unmanned aerial vehicles in recent years. Drones have opened up new ways of waging war, and it is hard to imagine an armed conflict without them.

This raises ethical, political and legal questions. Also for the control of arms exports: Since drones are often particularly small and light, components from model makers are suitable as components. Do their exports have to be strictly regulated in the future? And can the companies themselves prevent their products from being built into military equipment?

Extended flight time thanks to the model construction propeller

The drone in the photos from Myanmar is of the Skylark 1 type, manufactured by the Israeli arms company Elbit Systems. The manufacturer advertises, among other things, the long range of the drone, the possible flight altitude and the low volume that allows inconspicuous surveillance flights.

The propellers, with which the devices are equipped as standard according to various photo and video recordings, apparently also contribute to this. These are “CAM-Carb” propellers, manufactured by the Reutlingen-based model building company aero-naut. The carbon propellers are designed to be particularly efficient and, according to the manufacturer, have "optimum efficiency with low power consumption by the electric motor". In other words: Both model airplanes and military drones can extend the flight time.

Researchers from the environmental and peace organization Greenpeace found out that the propellers are built into the Skylark drones. They discovered photos of them from various wars and conflicts. The Israeli army has used them in the Gaza Strip in recent years, and European NATO countries have also used them. IS was able to steal one of the devices near Mosul in 2015.

The Skylark 1 is or was also sold in countries like Myanmar, whose army put a coup against the democratically elected government at the beginning of the year and is taking massive action against the population. An arms embargo against Myanmar had already existed because of serious human rights violations.

How did the armaments company get the parts?

The Swabian manufacturer of miniature propellers says it is not right that its components are used there and elsewhere in drones. “I don't want to have anything to do with arms companies, that's not my business. Our products should be fun, we produce for private customers and their hobby, ”says Thorsten Rechthaler. He is the managing director of aero-naut Modellbau GmbH, whose website actually does not allow any conclusions to be drawn about the armaments industry.

A model of the French Rafale fighter jets is still the most martial product in the company's range. The toy is of course not suitable for war missions. Aero-naut actually makes leisure products.

Rechthaler states that he himself only learned through a phone call from Greenpeace that Elbit Systems is installing its propellers in drones. He does not know how the armaments company got its propellers - at least not directly sold them to the Israelis. He suspects that the gunsmith obtained the goods through middlemen. He did not receive an answer to an email to the company asking for clarification. Elbit Systems also does not respond to questions from the taz.

Rechthaler made further inquiries to the Federal Office for Export Control. He obtained a certificate from the authority responsible for the control of arms exports that he did not have to apply for a special permit to ship his propellers to customers outside the EU.

Many loopholes in export controls

That would not be completely absurd: Products that are intended for civil purposes, but can also be used militarily, can in principle be subject to arms control. In the EU list of so-called dual-use goods, which regulates details, model components such as the propellers are not listed.

The propellers from Reutlingen are by no means the only model building components that are used in military drones. Last year, ARD reported on engines from a Hessian manufacturer that were used to power combat drones used by the Houthi rebels in the Yemen War. The Swiss weekly newspaper WOZreported on engines from a company from the canton of Ticino, which are built into Harop drones from Israeli production and were used by the Azerbaijani army in the Nagorno-Karabakh war.

The Greenpeace disarmament expert Alexander Lurz sees a need for reform in light of these examples. "The propellers for the Skylark drones show again that the German arms export control system obviously consists of an addition of loopholes," he says. “It is grotesque that essential components for military drones do not need an export license. In Germany we finally need the political will to end such a free ticket practice. "

This is also what the Bundestag member Katja Keul (Greens) demands. “Of course, the classification according to possible uses reaches its limits at some point,” she says. "With these special model components in particular, it seems obvious to me to revise the dual-use goods lists again in view of the current drone development."

Not even the model building entrepreneur Rechthaler from the aero-naut company would have a problem with that. “I think that's good,” he says. He has already introduced internal export controls. If in doubt, he rejects inquiries from corporate customers who are suspicious to him. “Just two weeks ago we received an order from a company abroad that couldn't explain to me what the propellers are for. We didn't deliver to them. "

The disadvantage of a legal regulation: The model makers would have to deal with more bureaucracy with their exports. The advantage: the state would not have to rely on the goodwill of individual entrepreneurs. In addition to the manufacturers, he would also have an eye on intermediaries. He could check the exports himself. And if in doubt, he could forbid it.